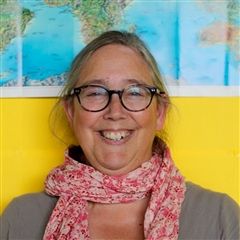 Social Studies Teacher
BA Oxford University
PGCE University of Surrey
MEd The Open University
Ms. Kleeb came late to the realisation that teaching was her vocation. Having published one novel—a Harlequin Romance—while still at university, she took a year off after graduation to write a second book, and then worked for six years in publishing before taking her PGCE at the University of Surrey. Once qualified, she set off for Africa, working in a variety of British and American international schools in Sudan, Kenya (where her younger son was born), Tanzania, Zimbabwe, and Uganda as a Social Studies and English teacher. She has taught IB, AP, A-level and IGCSE, and even done a stint as a home educator.

Returning to Canada in 2007, Ms. Kleeb taught for eight years at St Mildred's Lightbourn School in Oakville. Now that her two sons are grown, she is delighted to pick up her international teaching career again. She is particularly excited to become part of the NJC family because, as the daughter of a Swiss emigré to Canada, living in Switzerland will give her an opportunity to explore her roots.

Ms. Kleeb has a BA in Ancient and Modern History from Oxford University and a Master's in Education from the Open University, obtained back in the days when distance learning involved stamps and envelopes! When not indulging her love for history, Ms. Kleeb can be found coaching Model United Nations, drawing cartoons, writing fiction, competing in pub quizzes, or cultivating her herb garden. She has also been known to complete the occasional sudoku.
Back
Neuchâtel Junior College offers the unique opportunity to study Canadian curriculum abroad. While living in Switzerland in a French community, students enjoy an international education through travel and experiential learning in Europe. Gap year and Grade 12  high school students gain international experience and develop independence and life skills that prepare them for university and the global workplace.