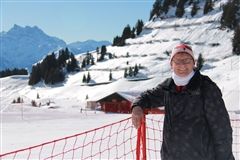 Head of School Bill Boyer announced his last year at Neuchâtel Junior College, ending his remarkable 12-year tenure as Head of School.
Mr. Boyer managed the school over drastically-changing decades and years of global economic turmoil. Most recently, he can be credited for stabilizing and increasing enrollment, establishing an Honorary Patrons’ Council that participates in Major Gifts fundraising for the school, and he is ending his career after leading an exceedingly successful 60th anniversary celebration.
“My years at NJC have been among the most rewarding of my career in education,” Bill said. “I hope that the success of our school and of its community has contributed to Leonard Wilde’s vision and that this will continue to endure as a legacy to the school’s founder.”
It is with tremendous pride that inaugural Chair of the Honorary Patron’s Council, Dr. Daniel Andreae ‘72, announces The Bill Boyer Scholarship, an endowed fund established by the Tan family with a lead donation of 150,000 Swiss francs. Over the next 3 years, every donation to The Bill Boyer Scholarship will be matched 100% up to this amount.
“It is with great appreciation that I learned of Bill’s retirement, a beloved Head of School who made a profound difference in my son Kevin’s life.” said NJC Honorary Patron Ken Tan. “Bill will long be remembered for everything he has done for NJC and he will be missed by hundreds of NJC alumni who knew him as a truly gifted Head of School.“
Mr. Tan says, “I know I speak on behalf of the community in expressing our deep gratitude for Bill’s extraordinary leadership, sincere commitment, and for his terrific accomplishments at NJC. I hope that you will all make a contribution in Bill’s honour and will feel free to send him a congratulatory note”.
If you would like more information about the Honorary Patrons’ Council or The Bill Boyer Scholarship, please contact the Advancement Department at 1.800.263.2923 x223 or advancement@neuchatel.org.
Be a part of the NJC legacy. Make a donation in honour of Bill Boyer today!
Back
Neuchâtel Junior College offers the unique opportunity to study Canadian curriculum abroad. While living in Switzerland in a French community, students enjoy an international education through travel and experiential learning in Europe. Gap year and Grade 12  high school students gain international experience and develop independence and life skills that prepare them for university and the global workplace.