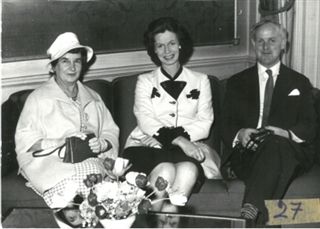 I still remember my first meeting with Leonard T Wilde at the Royal York Hotel almost sixty years ago.
LTW liked to meet the students and their parents before they began their year abroad. I was a shy, protected teenager, somewhat fearful of my pending experience. I remember LTW as a polite, red-faced gentleman, and felt relieved after we had met, but still quite nervous about leaving my safe and sheltered Forest Hill Village life. I was leaving a school whose student body was almost one hundred percent Jewish. My experience with non-Jewish students was virtually nonexistent and suddenly I found myself the only Jewish male in the entire class at Neuchâtel. LTW was very interested in all religions, especially Judaism and this gave us much to talk about when I was with him. He invited me to give a talk to the student body about the history of Judaism and the state of Israel during our overseas voyage. I, in turn, learned much about Roman Catholicism.
I was raised in a well-educated but unsophisticated family. The first visit my parents made to Europe was while I was in Neuchâtel. LTW was a man whose life fascinated me and I was eager to learn from him about travel, art, architecture, religion, food, wine, and fine hotels. Along with teaching me about the finer things in life, LTW also taught me to care about the less fortunate. He was a very generous man, who would always be sure that the restaurant and hotel staff were adequately tipped. He apparently came from a family of means and would subsidize students who were unable to pay the full tuition at the college. He had a dry sense of humor and loved to joke with the everyday people he met on his travels.
I was fortunate enough to be asked by LTW to return to Neuchâtel two years after I had graduated to assist in leading the summer tour. This certainly changed my life, as it was on this summer tour that I met one of the students, Eva Bohlig, who became my wife. We married three years later and now, after fifty-two years of marriage, three children, and six grandchildren we live happily in Santa Fe, NM.
About the author: Edward Borins graduated from the University of Toronto in Modern History and Modern Languages (French and German) in 1965 and went on to pursue an academic career, obtaining a M.A in History from McGill in 1968 and a B.Ed. from the University of Toronto in 1970. In 1974, he left teaching and joined David Mirvish in opening Canada's first art book store: David Mirvish Books on Art. In 1979, Edward and his wife, Eva, (Neuchatel, 1962/3), opened Edwards Books & Art which grew into one of Canada's largest independent bookstore chains, which was responsible for changing Canada's Sunday shopping laws through Edwards v. Regina in the Supreme Court of Canada, followed by an amendment to the Ontario Retail Business Holiday Act in 1987. In 1997, Edward and Eva moved to Santa Fe, NM, where they owned and operated Garcia Street Books, which they sold in 2011. They now devote their time to community work, travel, and their family in Toronto and Vancouver of three children and six grandchildren.
Back
Neuchâtel Junior College offers the unique opportunity to study Canadian curriculum abroad. While living in Switzerland in a French community, students enjoy an international education through travel and experiential learning in Europe. Gap year and Grade 12  high school students gain international experience and develop independence and life skills that prepare them for university and the global workplace.