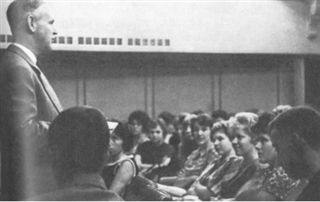 My Neuchâtel year was definitely the most influential year of my life, in good part as a result of Leonard Wilde.
My first exposure was in a personal acceptance letter in which he asked what courses I planned to take. Coming from a very academic boys’ school, I listed 11 subjects, including trigonometry, chemistry and physics. Wilde replied that this was possible but that I’d be so busy there’d be little reason to come to Switzerland. I took his point and chose only the minimum 9 subjects—among the least taxing. I also reveled in being outnumbered three to one by girls and, uniquely among my male classmates, shared our big double desks with a girl in every class. Wilde was our terrific history teacher, often enriching his classes with personal anecdotes and insights.

We all benefited from Wilde’s meticulous hard work, described by Peter Welsh, in organizing amazingly interesting tours at Christmas, Easter and end of year where, despite first-rate hotels, the tours were amazingly cheap, and, although chaperoned by teachers, allowed great freedom. The main rule was that a teacher was to be alerted if one planned to be out past 10:00 p.m. Otherwise, we were free to take advantage of cultural tours offered or to wander at large in Rome, Tangier, Paris, Vienna, London, etc.
Besides these multi-week tours, my Neuchâtel year was greatly enriched by several weekend excursions. In those days, another student and I would be packed into the back seat of the trusty black VW driven by Peter Welsh. On one long weekend, we went to southern France, through the Camargue to Saintes-Maries-de-la-Mer at the Pentecost weekend pilgrimage of European Gypsies. We also visited Roman ruins in Arles and outside St.-Rémy where we stayed the night in an old chateau which I have since been unable to find. Les Baux-de-Provence, from which the name of aluminium ore (bauxite) is derived, was still the ruin left by Louis XIII, and was as yet undiscovered by the tourist industry.

Another time on a Sunday excursion to Berne, before our return to Neuchâtel, Wilde stopped to attend a Roman Catholic mass. As a practicing agnostic I preferred to stay in the VW to memorize Lepanto by G.K. Chesterton which was due in English class the next day. Wilde insisted I attend the mass but said I could just sit and memorize without participating. I did so and recited Lepanto on the way home to Neuchâtel.
One memorable weekend trip to the Franche-Comté took place during the study break week before the end-of-year Grade XIII departmental exams. The French-Algerian negotiations were underway in Évian nearby, just across Lake Geneva. We crossed the border without incident, but a few kilometres inside France, our VW was halted by a group of heavily armed CRS—French riot police. As they examined our identification papers, I found myself wishing I hadn’t inexpertly changed the 3 in 1943 to a 2 on my Swiss student card to get into the racier French movies. Fortunately, at night and under flashlight, my card passed muster and my underwear remained pristine. After checking the car for weapons or plastiques thoroughly inside, out and underneath, we were allowed to proceed. On the same trip, we met an ancient small village priest who explained to us that he continued to venerate a local saint despite the saint having been recently unfrocked by Pius XII.
My warm memories of Wilde are of a kindly, generous English eccentric. Generous because I believe he personally subsidized our two Ghanaian classmates as well as tuition for some of the rest of us.
The last time I saw Wilde was in June 1965 during a honeymoon tour with my new bride, Susan. We dropped in on him unannounced. He came to the door of the Foyer where he welcomed us warmly and dashed upstairs to get what was obviously his bedside alarm clock, a fine Jaeger-LeCoultre. He apologized for it not being wrapped but said he had intended to send it to us as a wedding present. For dinner that night, he invited us to an excellent restaurant across Lake Neuchâtel where we enjoyed superb cuisine and an excellent wine—he drove!
You can imagine my shock the following September to hear of his tragic death along with one of his students. By chance, I recently discovered that Andris Janson, a member of our men’s cooking club had been a student beginning his year at Neuchâtel in 1965 and had been on the weekend trip when the shocking accident occurred.
About the author: Robert Blackburn was a Neuchâtel student in 1960-61 and graduated with a BA and MA from the University of Toronto‎ in 1965, 1966.   He served as a Canadian diplomat in Paris and twice in Washington, DC; he returned from Washington to Ottawa in 1981 where he worked in the Department of Energy, PCO Cabinet Office, Industry, Science and Technology and Immigration. He joined SNCLAVALIN International as Senior VP in 1997 and retired in 2013 after going to an office most days for 47 years.
Back
Neuchâtel Junior College offers the unique opportunity to study Canadian curriculum abroad. While living in Switzerland in a French community, students enjoy an international education through travel and experiential learning in Europe. Gap year and Grade 12  high school students gain international experience and develop independence and life skills that prepare them for university and the global workplace.