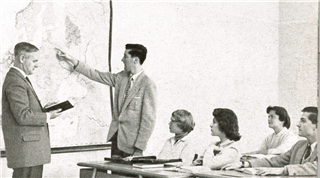 I remember Leonard Wilde as my German teacher in the 1964-65 school year, the last before his death.
I was the only boy in the class, and I think Mr. Wilde was sufficiently old-school to treat boys quite differently from girls. Specifically, he seemed to be determined to make me speak German outside class (though he probably saw it as finding me opportunities to speak the language). Several times he phoned my pension, asked for me, and insisted on speaking German over the phone while the family listened to my efforts (Madame Roulet spoke German).
At Christmas 1964, the school went to a small village in German Switzerland for a festive dinner, and just as the meal was ending, Mr. Wilde tapped me on the shoulder and said that I should give a speech thanking our hosts for the wonderful meal and service—in German of course! Talk about having to think fast—not just what to say but how to say it!
Then, best of all, around April 1965 Mr. Wilde told me that he could arrange for me to work in a textile factory in Germany for the summer, and live with a family in a small town nearby. And so it came to pass, the most memorable summer of my life up to that point.
I continued with German for 2 years at the University of Toronto, but majored in French and Russian. Even so, it was Mr. Wilde’s founding of the college that enabled me to improve my French. Later, I became a Canadian Government French-English translator.
Back
Neuchâtel Junior College offers the unique opportunity to study Canadian curriculum abroad. While living in Switzerland in a French community, students enjoy an international education through travel and experiential learning in Europe. Gap year and Grade 12  high school students gain international experience and develop independence and life skills that prepare them for university and the global workplace.