NJC was founded in 1956 by a visionary British educator named Leonard Wilde. He imagined the possibility of bringing students from Canada and abroad together in an international context that would help inform their world view. 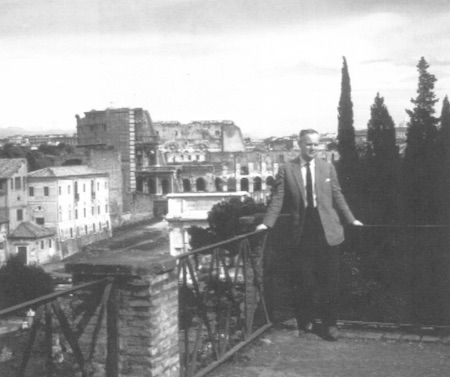 The founder of Neuchâtel Junior College, Leonard Wilde, was a British man who had led a peripatetic existence on several continents after graduating from Oxford University, and who had become a professor of English at Neuchâtel’s École Supérieure de Commerce in 1949. He soon realized that Neuchâtel was the ideal location for young people to acquire French while studying for entry into university in their homeland, and to do some travelling. Having already taught in the United States, he decided that he would recruit his students from there. With the support of his supervisor M. Jean Grize, Director of the École Supérieure de Commerce, and enthusiasm of the idea, Dr. Wilde took a leave of absence in 1951-52 to tour the United States, visiting schools and educational authorities.

Due to the difficulty of establishing a program acceptable to students from diverse States, Wilde was not successful. He did not give up on the idea however, and in 1954-55, while he was teaching at Shawnigan Lake on Vancouver Island, he made several trips to California seeking support. Frustrated at the lack of progress with the State’s Department of Education, Wilde took the suggestion of some of his pupils at Shawnigan Lake and focused his efforts on Canada. The first student to enroll in Neuchâtel Junior College was Peter Hebb, a student of Wilde’s at Shawnigan Lake.

During the summer of 1955, Leonard Wilde travelled throughout Eastern Canada, meeting interested parents who were advised by newspaper advertisements of his local stops. Thus when the school opened in 1956, it was a “Canadian school”. In its early years, the College was very much a part of the École Supérieure de Commerce. All of the laboratory work was undertaken there. The College also used several classrooms in the school building on the Passage Maximilien-de-Meuron.

Student enrollment grew steadily over the years. Most teachers were Swiss but by the mid-1960s, more Canadians began to appear. In 1965, when the Founding Director Mr. Wilde was killed in an automobile accident, Mr. James Thayer led the College until 1987. Thereafter, by school policy, the Head of School has a maximum five-year term with an option to renew. Swiss educational authorities closely monitored the College for three years after it opened. In 1959, satisfied with its quality, the City of Neuchâtel granted the College a permanent charter, allowing it to continue as an independent body with its own school board, le Conseil de Fondation. The charter also provided for a Canadian Advisory Committee to advise the College in educational and financial matters, and the Comité Canadien was established in 1960. Neuchâtel Junior College is therefore unique in that two volunteer groups, the Board in Switzerland and the Committee in Canada, control it. NJC has acquired a campus of its own over the years. In 1960, NJC purchased the elegant Foyer building, a historic home built in 1903, which includes the Peter Mitchelson Centre and the Craig Family Student Lounge. In the early 1970s, the Pavillon was added to the campus, providing classrooms, the Jerry Janda Resource Centre and the Billes Family Science Lab. In 2004, with funding from the City of Neuchâtel and the Spray Family, the Centre d’Études, a one-storey building, was constructed to provide a study space.

NJC is a member of the Swiss Group of International Schools (SGIS) and Canadian Accredited Independent Schools (CAIS). Representatives of the Ministry of Education of the Province of Ontario annually inspect the College, allowing it to grant Ontario Secondary School credits and to award the Ontario Secondary School Diploma. The majority of NJC graduates go on to study at leading universities around the world and many have distinguished themselves with careers that have earned them international acclaim.

Leonard Wilde would be pleased to know that the NJC he founded in 1956 with just 43 students is thriving in the 21st century!

Click here to read alumni memories of Leonard Wilde.
1 / 18
Neuchâtel Junior College offers the unique opportunity to study Canadian curriculum abroad. While living in Switzerland in a French community, students enjoy an international education through travel and experiential learning in Europe. Gap year and Grade 12  high school students gain international experience and develop independence and life skills that prepare them for university and the global workplace.